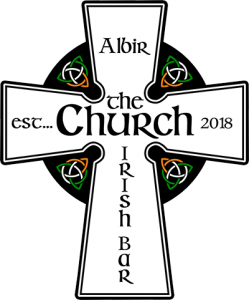 The church was positively packed to the rafters for its inaugural weekend.

The opening party saw Owners Georgina Doran and Harry Sykes surrounded by ‘ party worshippers’ of all ages and nationalities all dancing, drinking, singing and sinning their weekends away to some of the brightest and best live sounds on the coast.

Months of hard work, blood, sweat and tears all went into creating the ultimate live music hang out in Albir – And boy… it sure all came together in awesome fashion on the night.

Party goers were literally queuing out of the terrace and onto the street with their noses pressed firmly to the (yet to open) doors all eager to catch a whiff of the sweet scents of the black stuff.

The party was kicked off in unforgettable style with Benidorm’s Irish Rovers – probably the most well followed live act on the Costa Blanca, tearing up the virgin stage as only they can. The instantly recognisable classic ‘Irish Rover’ was belted out loud and proud and started feet and hands a like tapping and clapping away in time to the undeniably catchy rhythm. By the time The Rovers version of ‘Wagon Wheel’ was ringing out across the bar the energy in the venue was palpable and dozens of happy folk were singing along and Irish jigging around the place without a care in the world.

Next up steps John The fiddler to keep the party rolling – instantly recognisable and with his own special style of performance – He had the revellers eating out of the palm of his hands as he switched from Fiddle to organ to Guitar with effortless skill – There is good reason why John has been so successful for so many years, the audience delighting in being offered the chance to take a tipsy grip of his bow and drag it across his fiddle strings while he miraculously managed to actually transform the random strums into ‘real’ music.

As the live bands melodic tones drifted away into the Saturday night sky they were met in equal measure by the smokey aroma of ‘Masterchef’ fame – Dani Bowlers grill creations sizzling away on the BBQ that was nuzzled away cosily at the end of the outside terrace – as far as a free feed is concerned nobody was complaining about this spread.

It was a sensory overload for our guests and friends to enjoy – A great range of chilled drinks, from traditional pints of Guinness to bespoke in house cocktails were being lapped up. Numerous authentic pieces or artwork and collectables adorned the walls and free spaces – The ‘Cross Wall’ and the rather regal looking throne at the doorway provided great backdrops for a photo opportunity or two.

Prior to curtains up we were overjoyed to have secured the services of Green Hot Clover – These guys were flown all the way from the UK for the opening weekend and stayed for further gigs on the following Monday and Tuesday. The 3 piece are Manchester’s premier private events live performers and came with a huge reputation which they were only too happy to carry on their shoulders and we soon saw that this rep certainly wasn’t a burden and has been well earned and forged through years of gigging and perfecting their trade!

As Midnight came and went, as if only a few minutes had passed since the frenetic opening half an hour it was time to switch things up a little musically and it was the turn of the nights guest DJ Darius Voica to pump out some tunes of a different nature – the change in tempo was not met with a change in party attitude though and the dancing and toe tapping continued in no short supply.

Locals, tourists, photographers, friends, musicians and good old fashioned drinkers rubbed shoulders and blended together perfectly, swaying and cajoling each other late into the night and to a (wo)man they all seemed genuinely complimentary of our little bit of musical paradise.

One local newspaper journalist covering the event affectionately described The Church as a “Heavenly hipster hangout with a devilish side” in his own personal review – An allegation we would gladly admit to!!

We couldn’t be any happier with our opening weekend and we would like to thank you all for sharing in what will hopefully be just the first of many fiestas at The Church.

Want to join the discussion?
Feel free to contribute!